Inflation and Earnings and Elections, Oh My!

There were a host of worries this October that might have kept us from following the yellow brick road to financial prosperity. Let’s look at the worries – from least important to most important. Remember: pay no attention to the man behind the curtain (more on him later).

The Mid-term elections present plenty of drama in 2022. An intruder attacked the Speaker of the House’s husband via home invasion, one Senate race centers on a candidate’s health, and the indictment of former President Trump looms as a possibility. And we haven’t even gotten to post-election day voting disputes. We would be remiss not to mention that the former Brazilian president was re-elected three years after being released from jail on annulled corruption charges. Fact is stranger than fiction.

About half of the S&P 500 companies have reported earnings and as expected, corporate profit growth has slowed due to inflation and higher borrowing costs. This will be the 5th quarter in a row when corporate profit margins decline, and, excluding earnings of the energy sector, profits have now declined two quarters in a row.[1]

Inflation remains above the Fed’s target. Despite moderation in commodity prices, both goods and services inflation remained sticky in October, keeping the Fed on track for a 0.75% increase in interest rates this week. The Fed does, however, appear to be more nuanced in its outlook. Globally, both Canadian and Australian central banks downshifted their interest rate hikes slightly in the last week.

Given this plethora of concerns, let’s turn to the markets to survey the damage. Surely the market declined? Actually, the S&P 500 gained 8.1% during October. There are a couple of other return numbers to note in the chart below. Both mid-cap and small-cap companies outperformed large stocks, and high-yield “junk” bonds outperformed high quality bonds. During a recession, small-caps and junk bonds tend to suffer, as both investment categories represent vulnerabilities; smaller companies have less buffer to withstand adversity, and junk bonds have higher debt loads or risky aspects to the business. It is notable that the small-cap and junk bond markets don’t seem to be worried about a recession.

Meanwhile, international markets had a difficult month. International stocks, represented by the MSCI EAFE, gained less than any of the U.S. categories. Emerging market stocks lost money in October, driven by Chinese shifts away from free markets, which drove Chinese and Hong Kong markets down. International bonds did not fare well either, as a strong dollar weighed on foreign currencies.

During October, value stocks outperformed growth stocks significantly, continuing the trend that started a year ago. Over the last year, the Russell 3000 Value index is down only 8%, while the Growth index is down over 26%, reflecting the increased discounting of future earnings. This is a notable change from the long-term (10-year) returns shown in this month’s performance charts. The Fed is unwinding its decade-long stimulative policies, leading to a notable departure from the long-term returns shown in this month’s performance chart. The 10-year period was characterized by stimulative policies of the Federal Reserve that are being unwound. We’ll talk about how to respond to this change in our portfolio recommendations.

There are many “men behind the curtain”: the news headlines, someone else’s portfolio that did better this month, or simply your own second-guessing. It’s important to anchor to something solid. Our guide is the OneAscent Navigator, a data-driven process of synthesizing what’s important. Let’s review what it is telling us.

Review of our Navigator Outlook 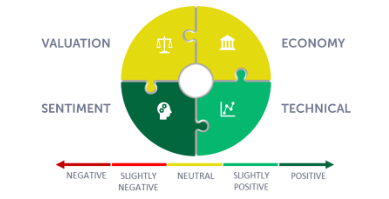 Valuation: Valuation of both stocks and bonds remains in the neutral zone where they first arrived earlier this year. Both asset classes have become cheaper this year. Bond yields have increased, and stock prices have become less expensive relative to next year’s earnings. However, estimates for next year’s earnings are beginning to decline. How far those estimates decline is likely to impact returns. The Federal Reserve recently wrote a paper suggesting margins have been inflated by too low interest rates and taxes, and a shift in those factors is likely to lead to lower profits in the future.[2]

Economy: The economic data is a mixed bag; employment is strong, and the consumer is spending. Inflation is higher than the Federal Reserve is comfortable with, but there are signs of slowing in commodity prices that should flow through to products and services over the coming months. The biggest negative is fear that the Federal Reserve (along with central banks across the globe) will be overly aggressive in fighting inflation, thereby diving us into a recession.

Technicals: Technical indicators are positive. The stock market became quite oversold at the end of September, and October brought us a sharp rally. The long-term technicals are not all positive, but there are some good signs: market breadth has begun to stabilize and the very long-term (200-week) moving average acted as a technical support level in October.

Sentiment: Investor sentiment has been negative all summer and remains so in October. Measures of consumer confidence appear to have recovered some from very negative readings, rendering sentiment very positive in the short term.

Outlook: Earnings Season and the Election Lead to Continued Volatility

We should start by pointing out that the mid-terms don’t appear to have a definitive track record of positive or negative returns. If the incumbent president loses control of the House during the mid-term, as may happen in 2022, average returns for the next year are 14%, slightly above the 13% average returns following all mid-terms. Third years of presidential terms tend to be the strongest; since 1928, the S&MP;P 500 has returned 13.5% on average during the third year of the presidential cycle, versus 5.7% average return for the other three years. This bodes well for the coming year.[3]

As the earnings season finishes, comments about the strength of the consumer and margin pressures may drive continued volatility as the market forms expectations of how much of an earnings slowdown 2023 will bring. The Federal Reserve will also give clues as to when they may slow their interest rate increases and the market will react to Fed comments and the data. Both earnings and the Fed are likely to drive investor behavior in the short term.

Maintaining discipline remains crucial. If concerns about the election, earnings, or inflation caused investors to sit out October, they would have missed the tenth best month of the last 20 years. We recommend investors take the following actions:

This material is intended to be educational in nature, and not as a recommendation of any particular strategy, approach, product or concept for any particular advisor or client. These materials are not intended as any form of substitute for individualized investment advice. The discussion is general in nature, and therefore not intended to recommend or endorse any asset class, security, or technical aspect of any security for the purpose of allowing a reader to use the approach on their own. Before participating in any investment program or making any investment, clients as well as all other readers are encouraged to consult with their own professional advisers, including investment advisers and tax advisors. OneAscent can assist in determining a suitable investment approach for a given individual, which may or may not closely resemble the strategies outlined herein.