Risk assets generally rose in February with both US large-cap and global equity indices advancing 2%-3%[1]. The US economic recovery has continued with improvements in the labor market, corporate earnings, and gross domestic product (GDP). The Federal Reserve has continued to communicate an accommodative stance toward monetary policy and the US House of Representatives passed a $1.9 trillion stimulus bill that is now awaiting approval in the Senate.

Perhaps not surprisingly, this stable and improving backdrop for risk assets led to concerns late in February regarding the potential for above-average inflation and a tightening of monetary policy. These fears were manifested in the form of higher US Treasury rates, which ultimately impacted assets that had benefitted from a low interest rate environment such as technology, consumer staples, and utilities. The charts below highlight the switch in market leadership from 2020 to 2021 as more cyclical sectors such as energy and financials have led so far this year. More interest rate sensitive sectors like utilities and consumer staples have struggled. In addition, investments in longer maturity US Treasury Bonds have declined more than 9% year-to-date through February[2]. 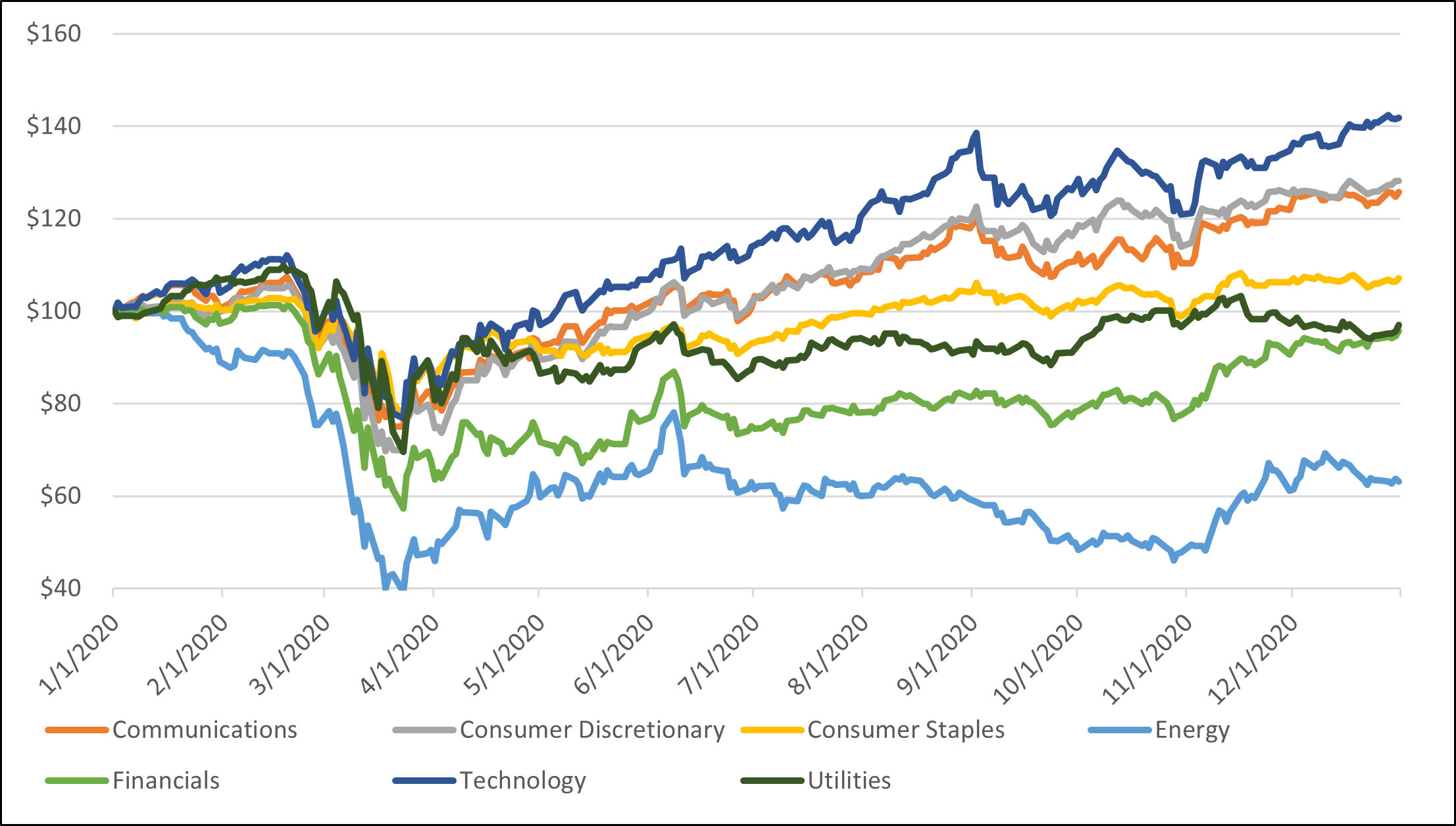 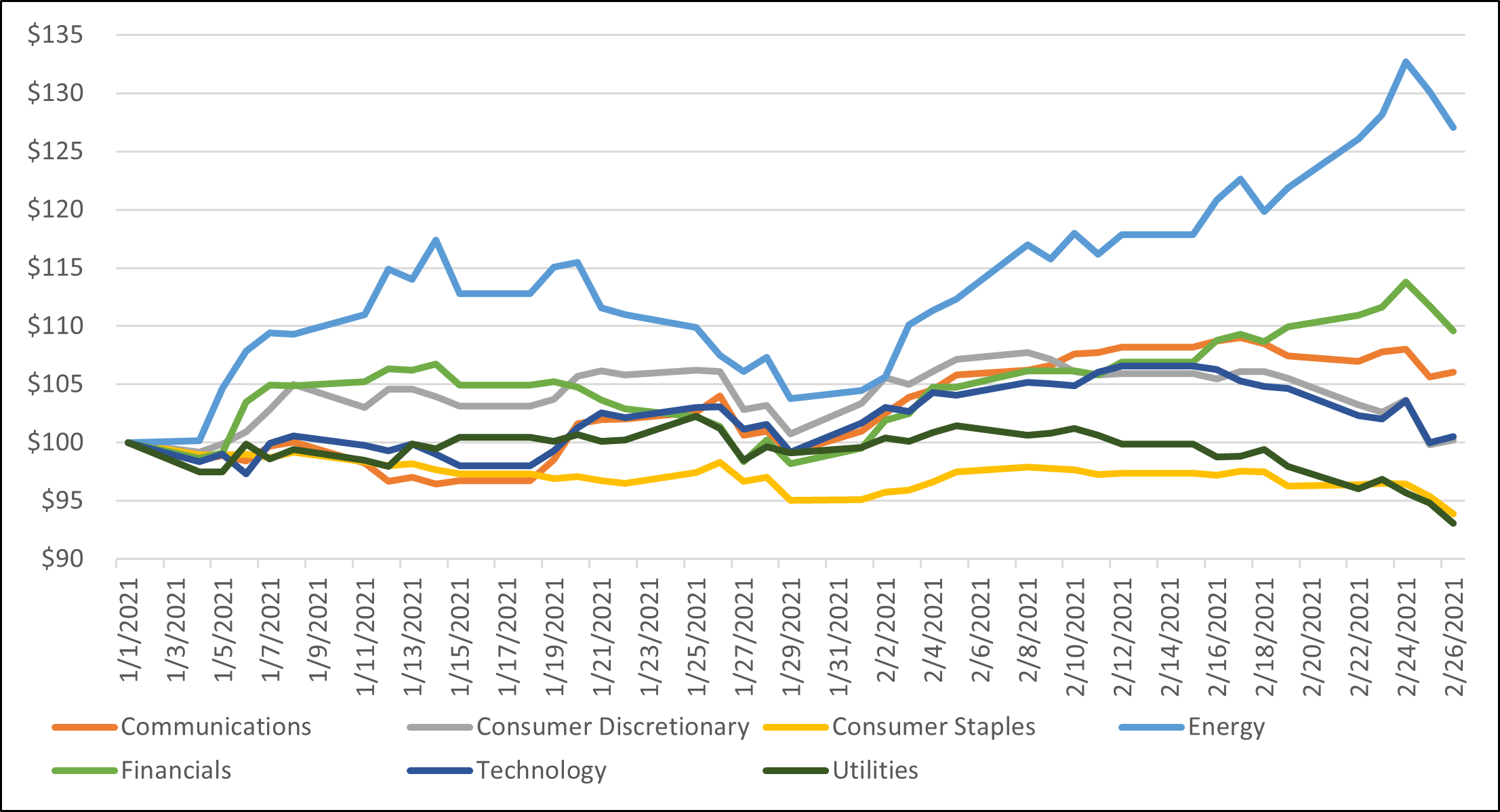 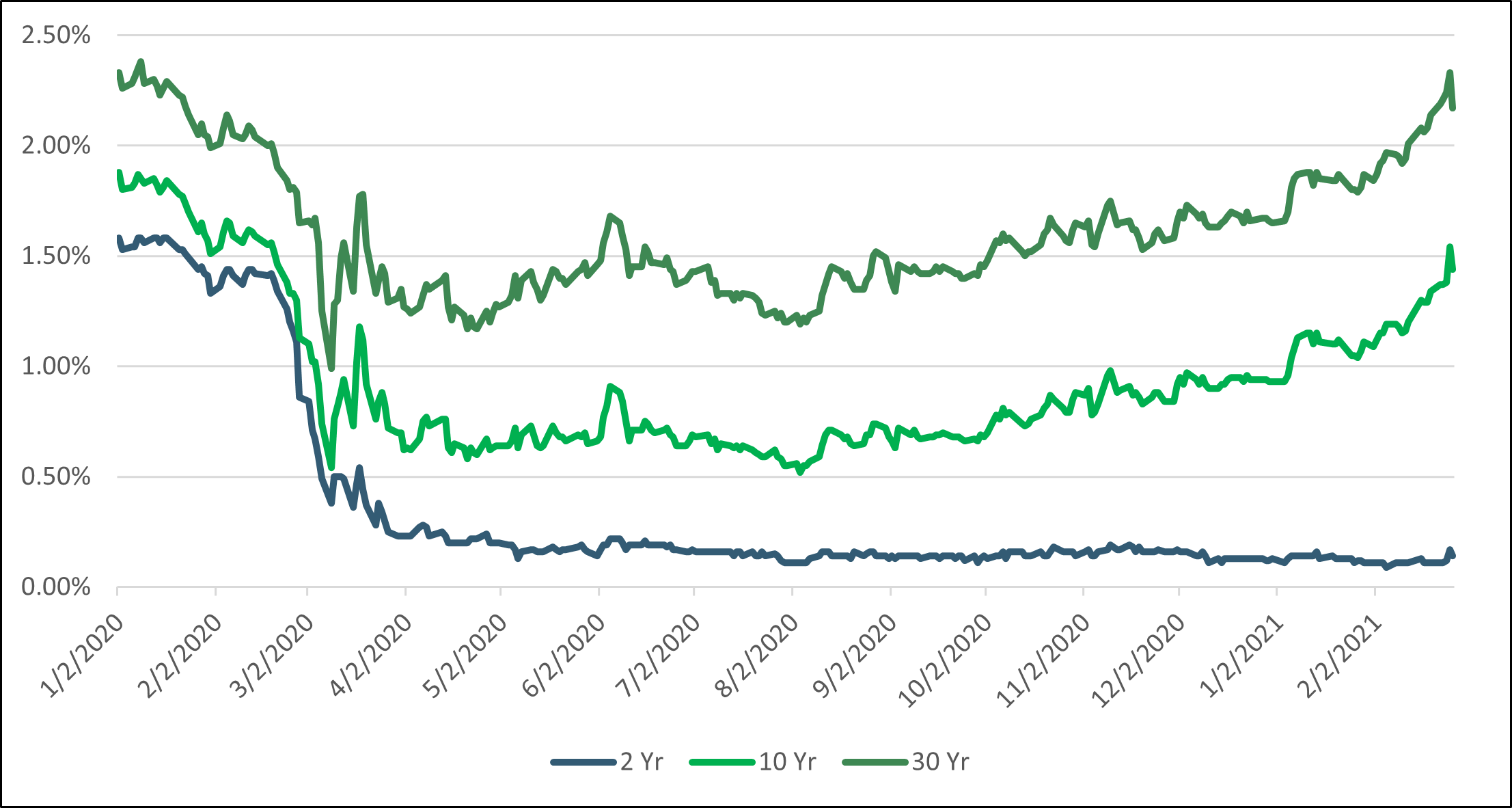 The COVID-19 vaccine roll-out is well underway and it has been encouraging to see the number of cases, hospitalizations, and deaths decline significantly (see charts below). The vaccination program is targeting the most vulnerable populations of our society; those that were most like to require advanced care or ultimately succumb to the disease. While the multiple waves of the virus, which have ebbed and flowed over the past year, have made us cautious to declare the “worst is over” from a health perspective, it certainly seems as though we are trending toward a “normal” society again, potentially with some lasting impacts on our own behavior and spending habits such as the acceleration of e-commerce. 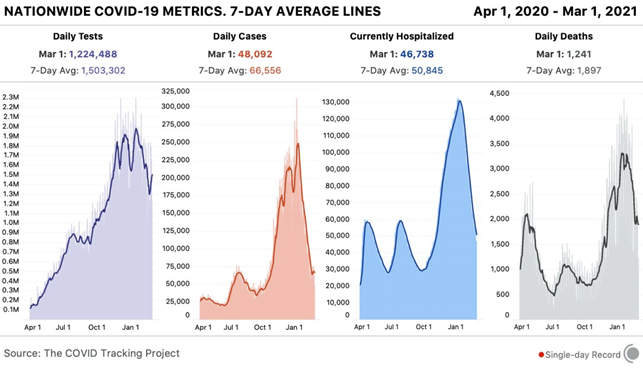 Despite the significant recovery, which began last summer, the number of those filing continuing claims for unemployment benefits as well as those seeking benefits for the first time remain at levels that match or exceed the worst points of the 2008-2009 global financial crisis (see chart). The pace of the labor market recovery has slowed, but it is reasonable to expect that it will continue as the Federal Reserve has communicated their intention to target an environment of “full employment” (note, there is no clear definition for this term), and Washington is continuing to provide aid, with a large infrastructure spending bill still a possibility (and certainly a need). 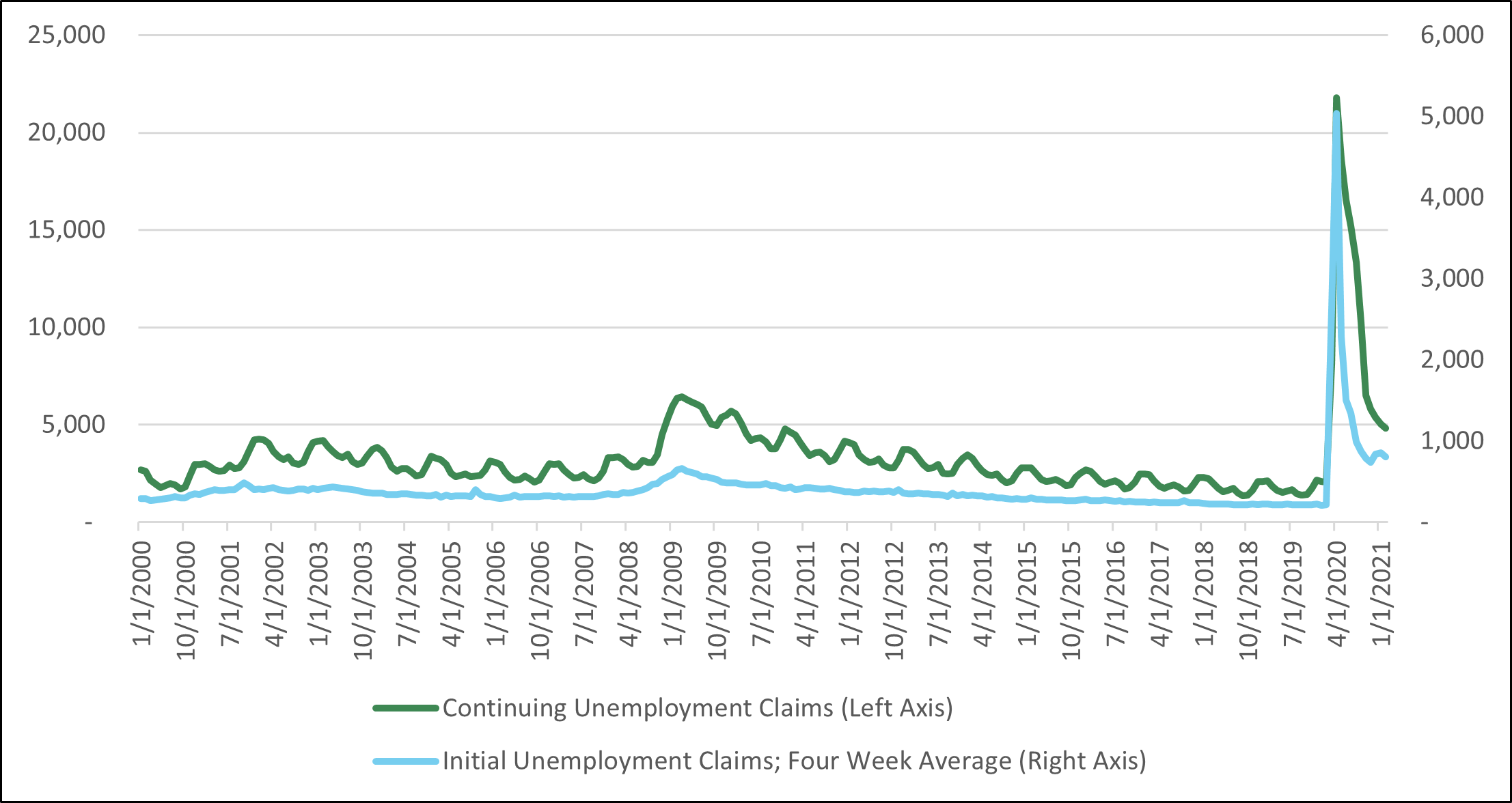 Given that so much of valuing a company is based on future expectations of company profitability, the stock market can be thought of as an anticipatory mechanism. That said, it is not surprising that the S&P 500 has been trading at, or near, all-time highs since last summer despite the virus continuing to advance and the US labor market, while in recovery, being one of the most challenged of our lifetimes. Market participants have been setting expectations not based on the economic environment today, but in a future in which companies are expected to be more profitable, driven in part by the significant fiscal and monetary stimulus that has supported households and businesses and kept borrowing costs low. Investor expectations for the S&P 500 have become increasingly optimistic, which has driven the price paid for the index in terms of expected future earnings to levels not seen since the early part of the century.

So, how should investors and portfolio managers navigate this unprecedented environment? On balance, the environment remains supportive for risk assets, but we advise caution based on current valuations. The situation today feels, in many ways, not too dissimilar from where we were in the months and quarters leading up to the pandemic. The economic backdrop is stable and improving, though the prices of many risk assets are above long-term averages, not leaving much protection against an unexpected shock. The future is not fully predictable, and it is important to plan for unexpected outcomes, particularly when optimism abounds and asset prices are near all-time highs.

We believe that today is an opportune time to consider more defensive and/or hedged equity strategies as a potential source of diversification and stability. There may be opportunities to reduce exposure to areas that have run above target or add to asset classes / industries that struggled the most during the pandemic.