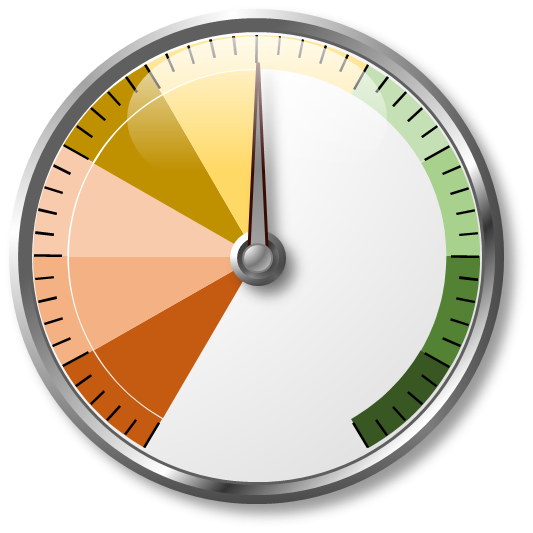 We are approaching the end of 2021, which has been a robust year for the US economy and public equity market, with more than 6 million net new jobs added and the S&P 500 index advancing more than 23% through the end of November.  Corporate earnings have reached record levels, and households (on average) are in one of the best financial positions in decades.  However, despite all of the good economic and financial news, household sentiment has declined to abysmal territory.  The reason: inflation.  Americans are witnessing costs of things like homes, gasoline, groceries, and childcare increase, so, when surveyed, the average respondent expresses concern that their standard of living will decline over the next year as costs may outpace income gains.

It is not uncommon for household sentiment to remain subdued for multiple years following a very severe economic contraction like the one we experienced in 2020, but it is concerning that the relatively low optimism about their financial future expressed by the average American stems from a separate concern (inflation as opposed to the pandemic) and these feelings of dread are occurring during a period when other economic indicators imply a very healthy and growing economy.  Something has to give.

It is our belief that the pace of rising prices will abate as household demand moderates, supply disruptions clear up, fiscal and monetary stimulus normalize, the pandemic moves to the rearview mirror, and long-term deflationary trends like automation continue to evolve.

Many of the increases in the cost of labor, materials, and finished goods that we’ve experienced in the last year may be here to stay, but we anticipate a return to a range of price increases in 2022 that are more “normal” and closer to historical averages.

The labor market and corporate earnings have been robustly improving in 2021, though rising prices have been a significant drag on household sentiment in the second half of the year.  From the University of Michigan November Survey of Consumers which asks households nationally each month about their opinion of the economy, their financial health, and expectations for the future (our emphasis added):

“Consumers expressed less optimism in the November 2021 survey than any other time in the past decade about prospects for their own finances as well as for the overall economy. The decline was due to a combination of rapidly escalating inflation combined with the absence of federal policies that would effectively redress the inflationary damage to household budgets. One-in-four consumers cited inflationary erosions of their living standards in November. Rather than gradually easing along with diminished shortages, complaints about falling living standards doubled in the past six months and quintupled in the past year. Consumers anticipated declining inflation adjusted incomes, and expected spending cutbacks due to rising inflation to slow the pace of growth in the national economy in the year ahead. With one important caveat: consumers have a strong desire to resume more normal holiday gatherings with family and friends, and to use their accumulated savings to fund their celebrations and gifts despite higher prices.”

Our interpretation of these responses is that US households, on average, anticipate cutting back on spending in 2022.  This would potentially be occurring at a time when supply chain disruptions and above-average consumer demand for finished products may be leading to a build-up of raw materials and inventories by businesses.  As of now, we have not seen evidence of an inventory overhang, but this is something that we are watching closely for 2022.  Otherwise, data regarding the economy recovery remains on track. 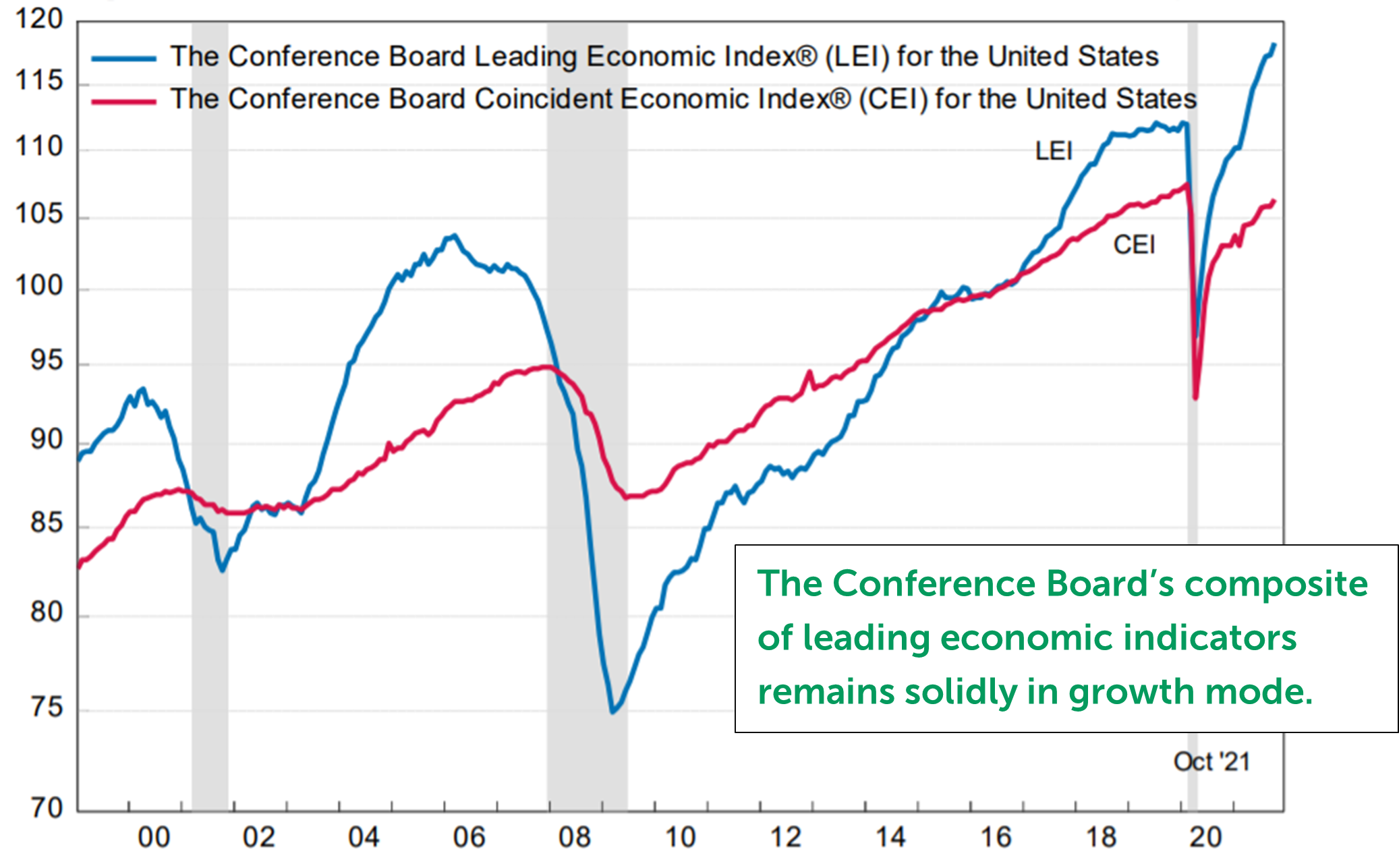 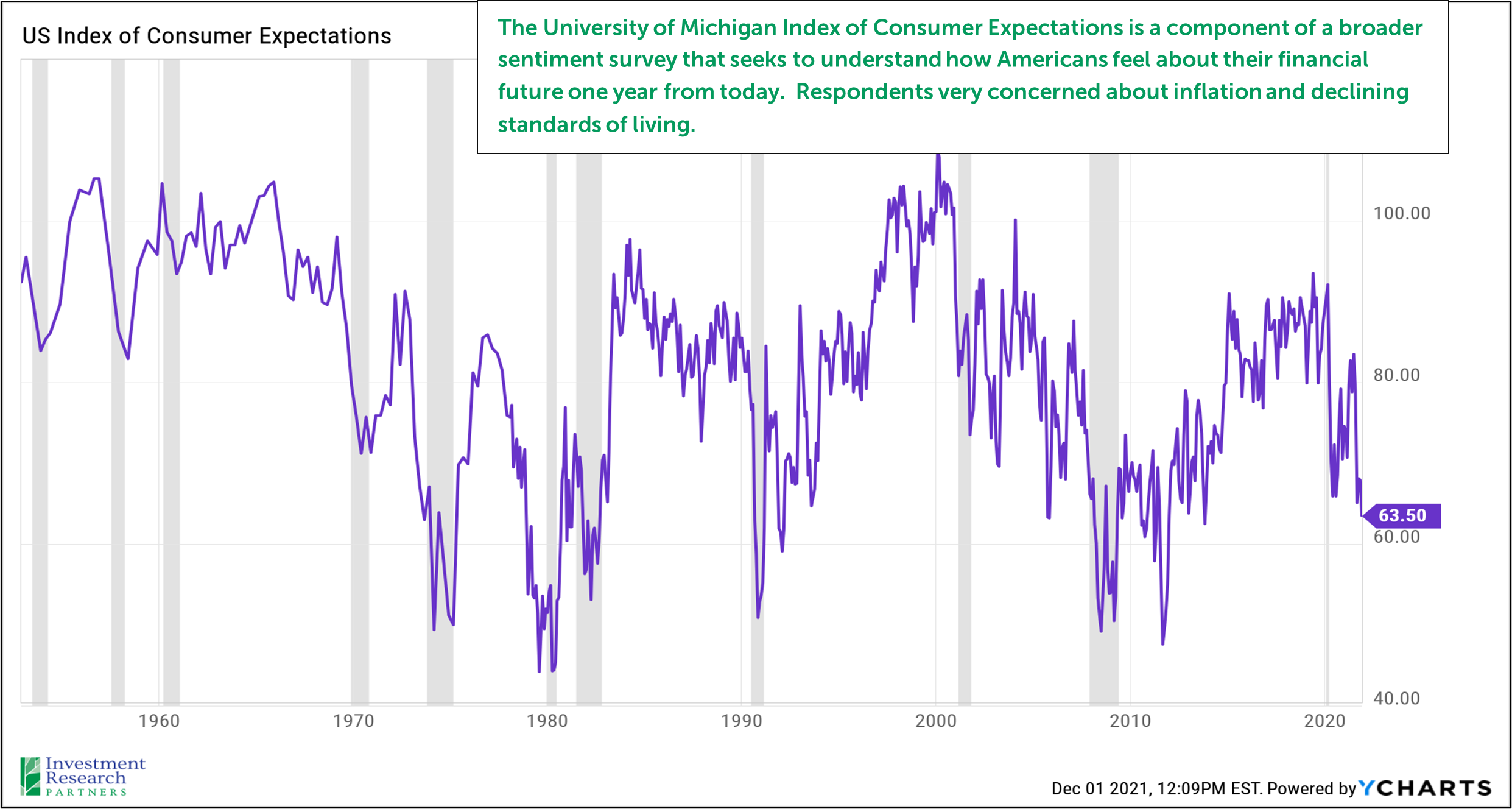 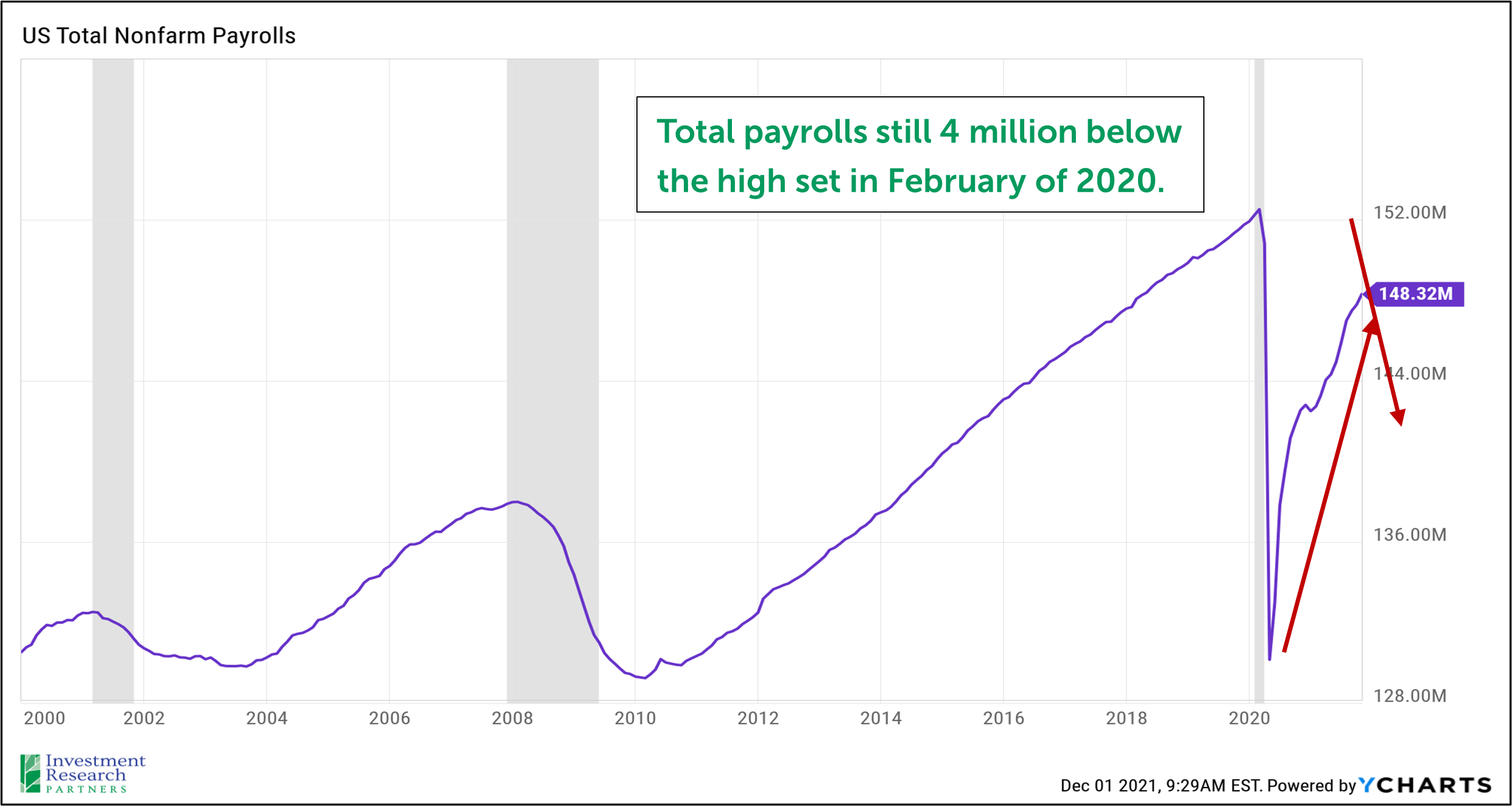 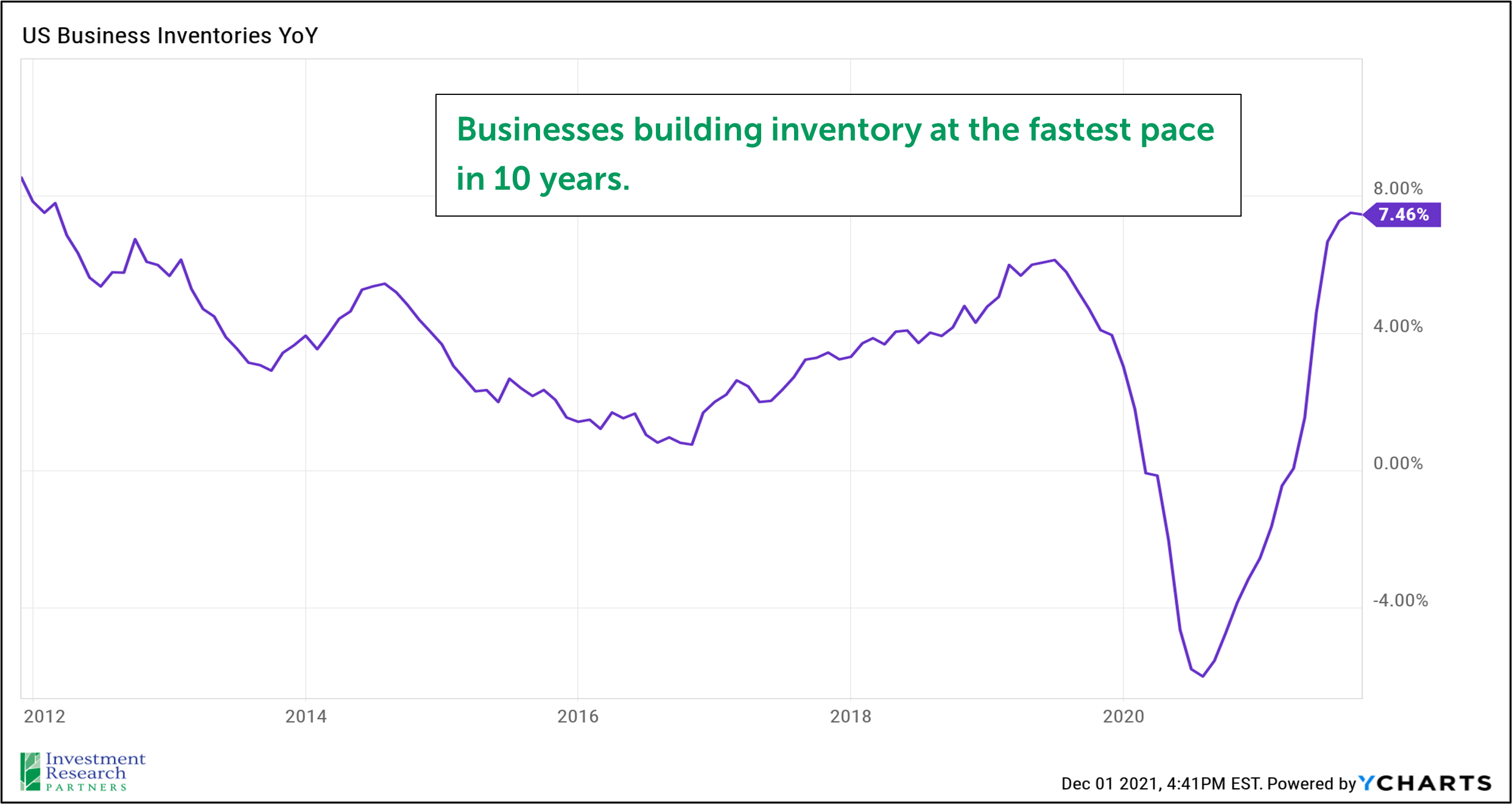 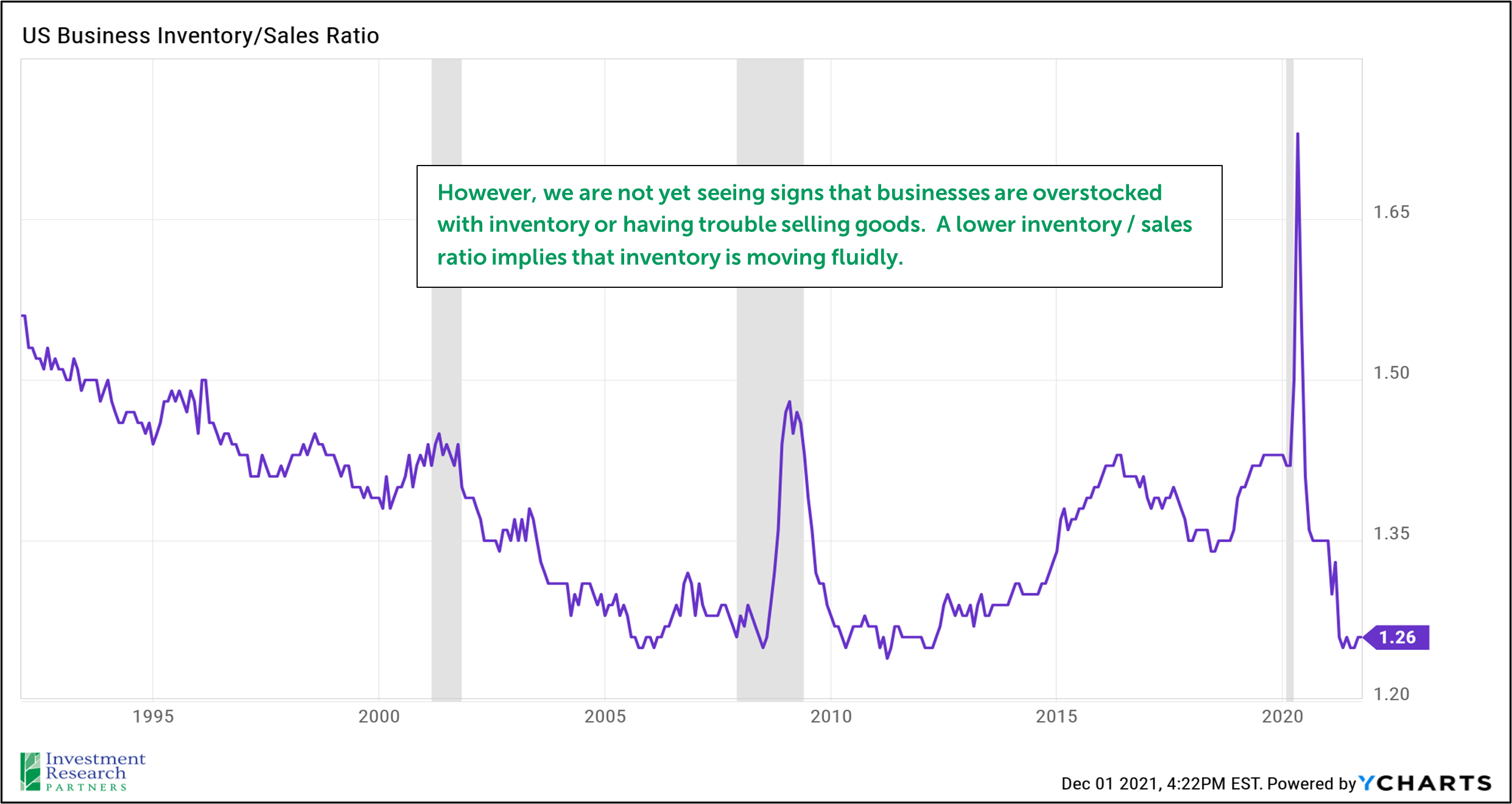 The pandemic has led to significant imbalances in supply and demand across multiple parts of the economy.  Massive government stimulus and low interest rates coupled with a desire to stay-at-home for much of the pandemic led to a surge in demand for new homes and home remodeling which sent lumber prices soaring earlier this year (at the same time that production capacity may have been constrained due to public health-driven restrictions).  In this single example, supply and demand found a balance as production capacity increased and demand slowed. 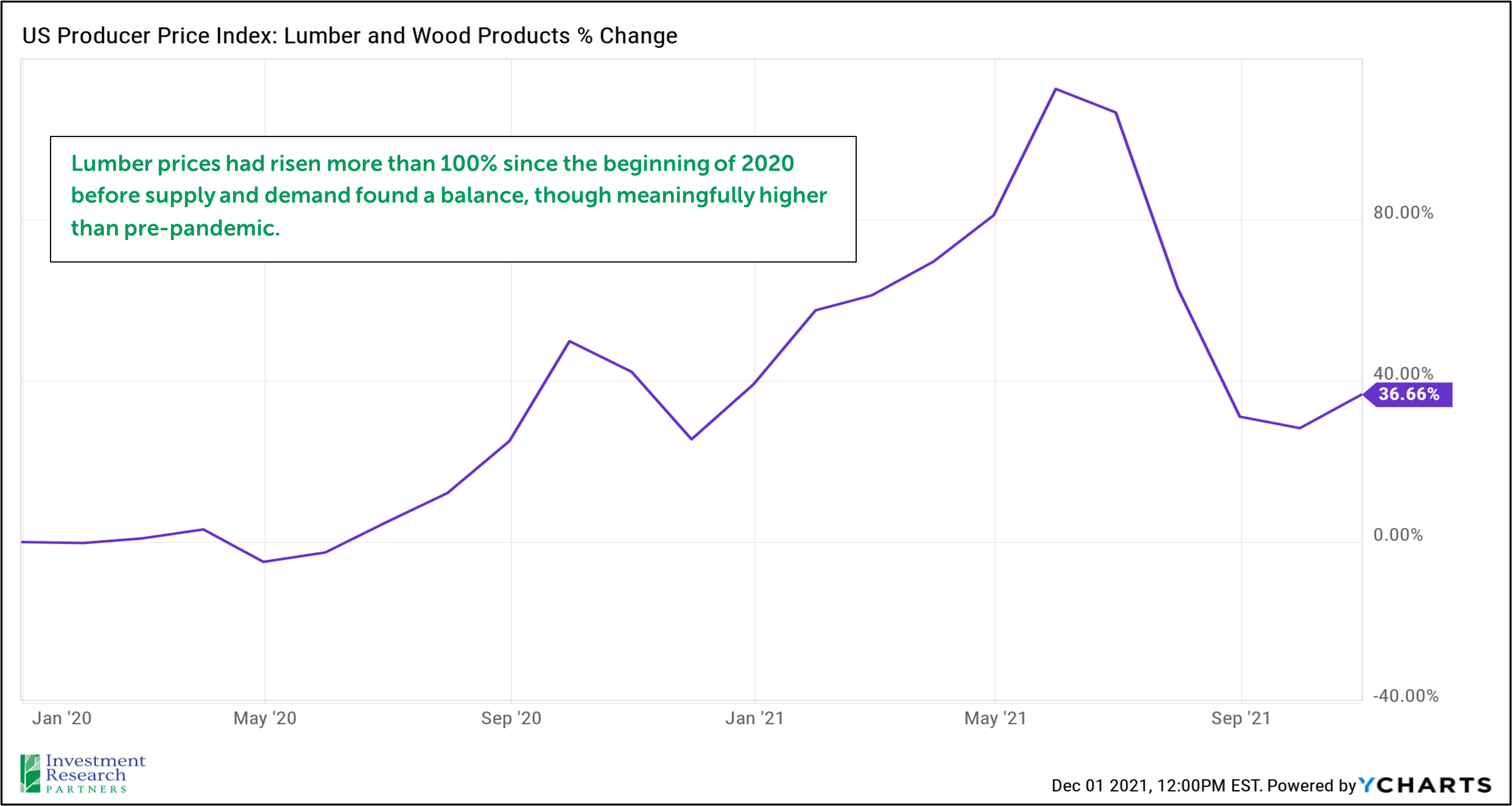 Many asset classes of public securities, particularly in the US, are trading at or above long-term averages today (expensive).  However, robust earnings growth and the recent market decline in November and early December has led to a modestly more attractive entry point for investors.  Additionally, we are witnessing an extreme environment with respect to valuation dispersion that has not been seen since the “dot com” bubble more than 20 years ago.  In other words, the valuation spread between the S&P 500 index’s most expensive stocks compared to its least expensive stocks is very high, potentially creating an attractive environment for stock and sector selection, particularly those focused on value if dispersion compresses in the future. 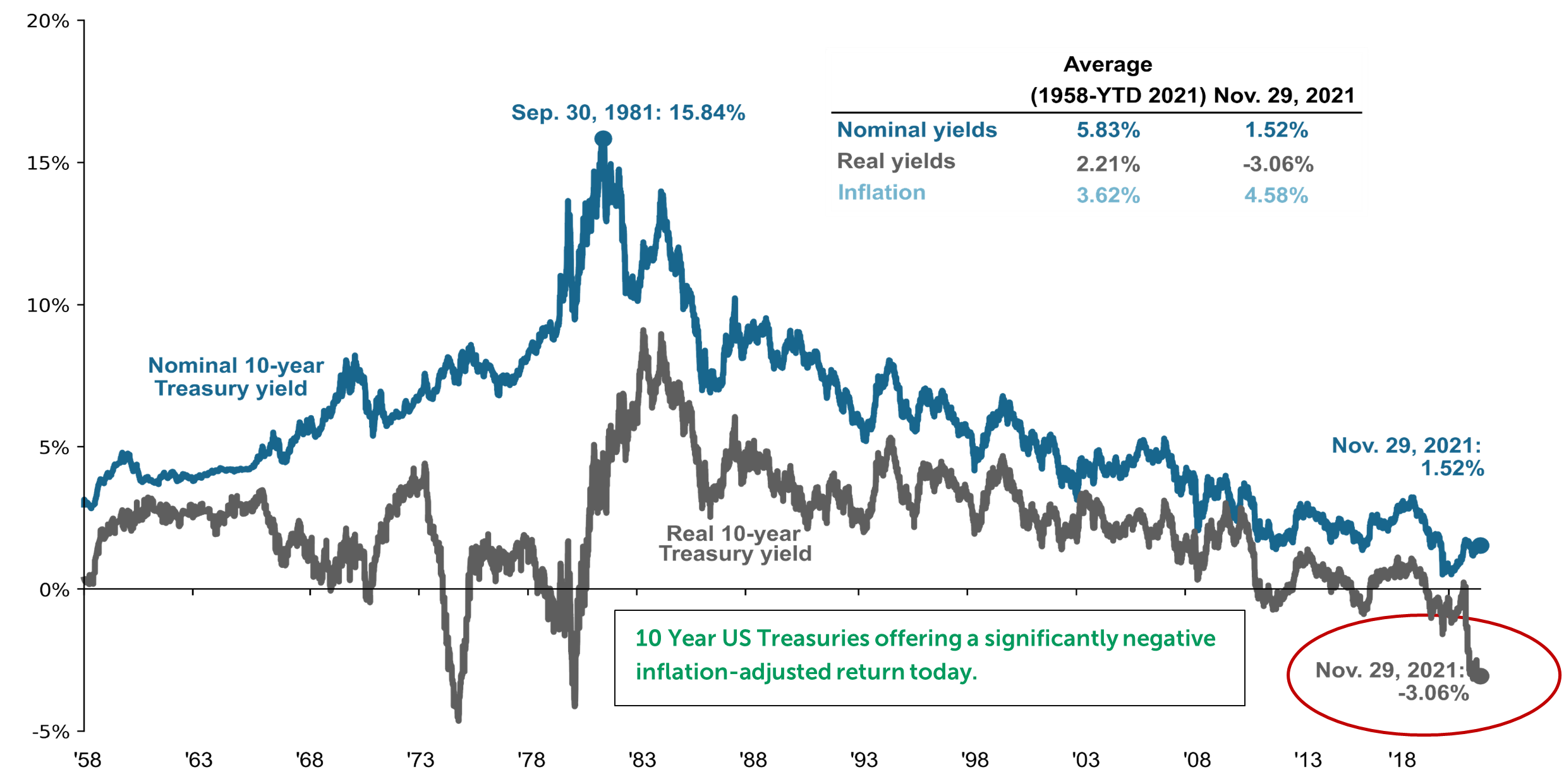 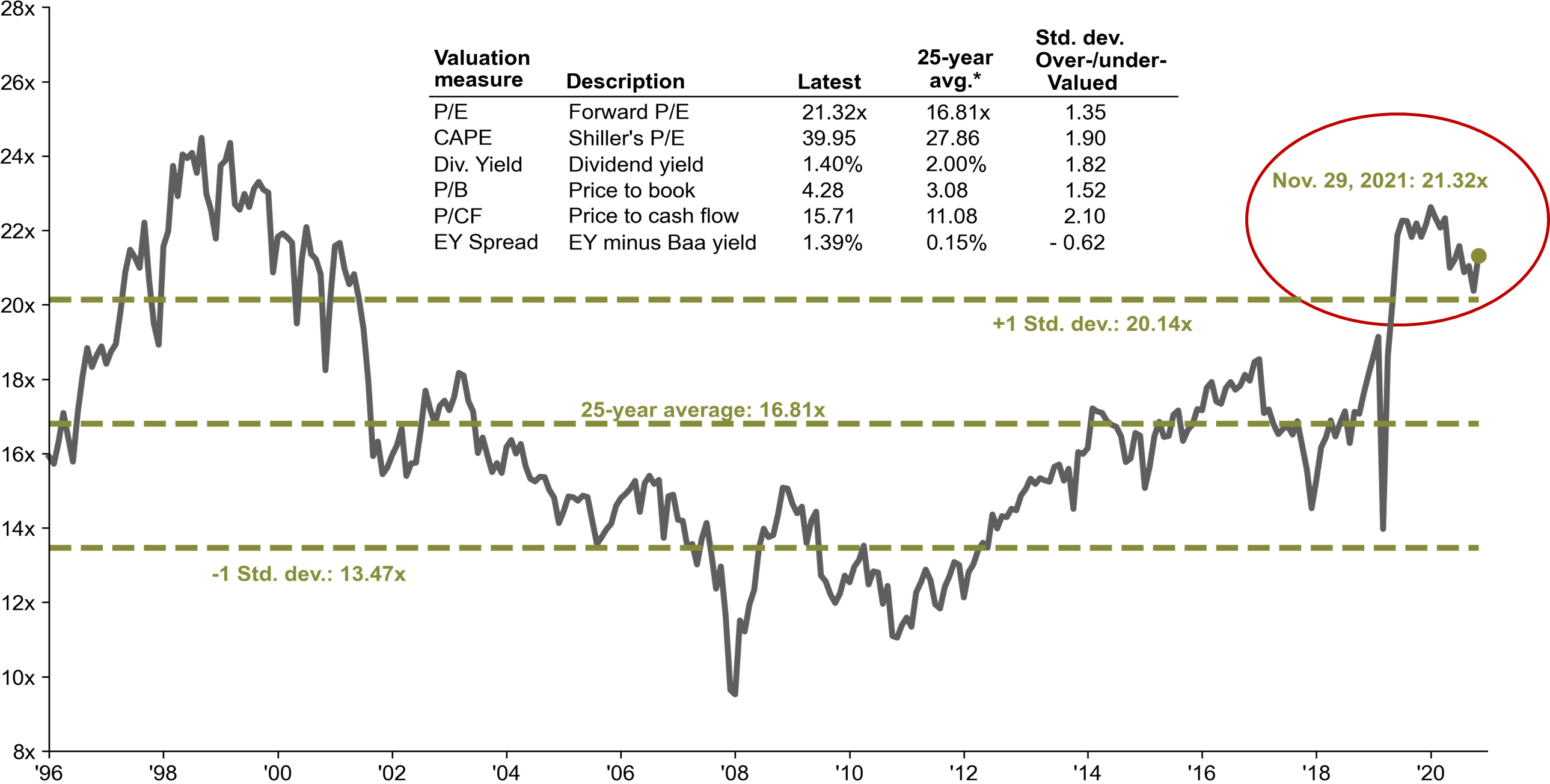 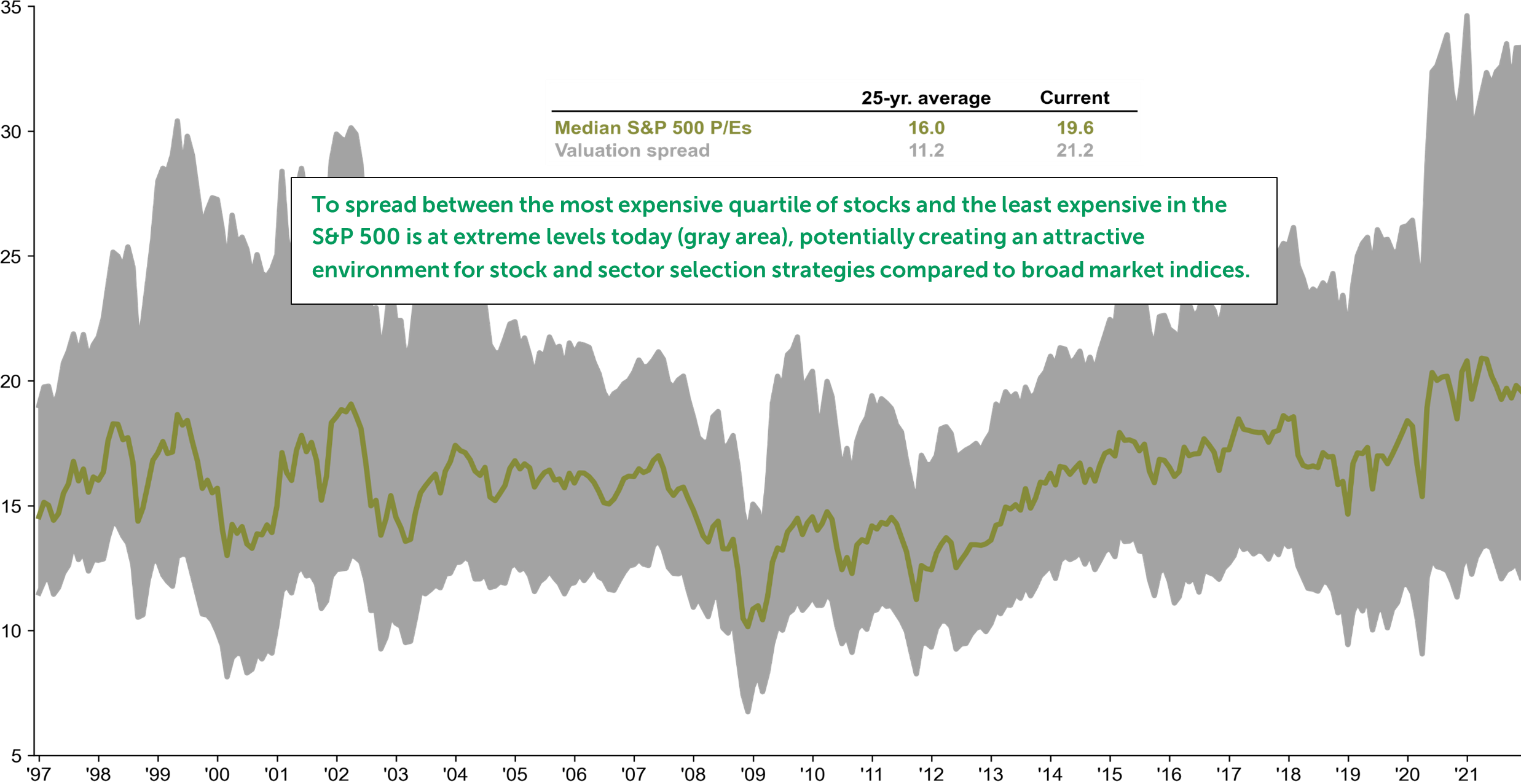